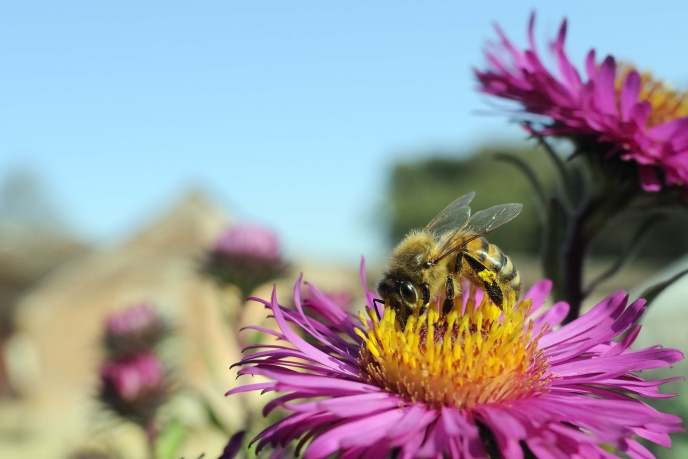 Bees and other wildlife may have won a temporary reprieve and could now avoid being poisoned by a toxic pesticide due to the recent snap of very cold weather killing off virus-transmitting aphids which can attack sugar beet crops.

The Wildlife Trusts are delighted that the Government will not be granting an emergency authorisation for the use of a banned neonicotinoid on sugar beet this year. Tests have found that the level of virus infection forecast is 8.37%, which is not enough to meet the threshold for the use of the neonicotinoid, thiamethoxam, to combat the virus which affects sugar beet. [British Beet Research Organisation announcement today here.]

While The Wildlife Trusts are pleased that the Government will not be proceeding with this highly damaging authorisation this year, this ‘stay of execution’ does not change the underlying issue – that the neonicotinoid could be allowed in the future.

The Wildlife Trusts believe that the Secretary of State’s decision to grant emergency authorisation was flawed and legally unsustainable, and the fact that the virus threshold was not met this year after an uncharacteristically cold January and February does not ensure that neonicotinoids will not be applied to treat sugar beet seeds in future seasons, and have devastating impacts on UK wildlife.

The Secretary of State (SoS) claimed to have met the three tests that are required for an emergency authorisation. The tests are: that the authorisation appears necessary because of a danger which cannot be contained by any other reasonable means; that the use of the product will be limited and controlled; and that there are special circumstances. However, because of the cold weather, the aphid threshold which triggers the authorisation was not met.

Joan Edwards, director of policy at The Wildlife Trusts says:

“We believe the derogation would not have resulted in the so-called ‘limited’ use of the seed coating that contained the neonicotinoid. In reality, the rules would have allowed the use of this highly damaging chemical over a large geographical area for 120 days. The weather conditions for the aphids could, potentially, have been very different across these areas and vary from farm to farm. This means the chemical could have ended up being used in places where it was not needed – this is not limited use.

“The Wildlife Trusts also question the legality of this year’s cancelled derogation and future derogations because no new evidence or analysis has been provided by the Secretary of State which justifies reversal of the 2018 decision to ban thiamethoxam. What’s changed since former Environment Secretary Michael Gove said ‘The weight of evidence now shows the risks neonicotinoids pose to our environment particularly to the bees and other pollinators’?

“Finally, we would like to know why the Secretary of State decided that the situation was different this year – and why the advice of the Health and Safety Executive was ignored. In November 2020 it recommended that the ‘emergency authorisation should not be granted’.

“The threat of neonicotinoids has not gone away, and The Wildlife Trusts will be seeking legal advice on how to proceed with next steps in addressing this issue.”