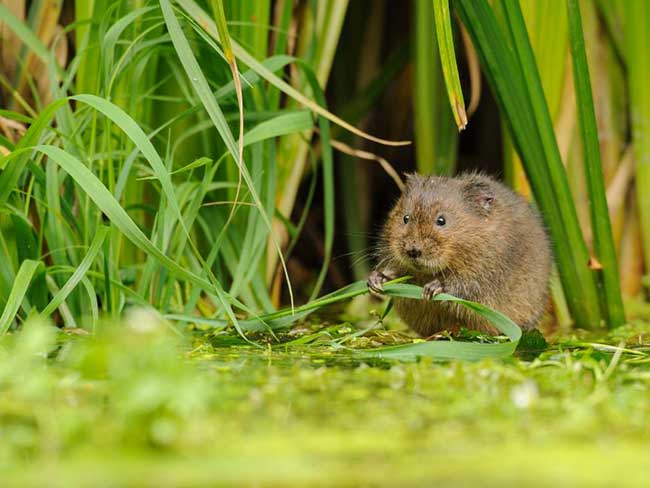 In last month’s blog we wrote about the power of slowing down and observing nature in your local green space, and the benefit that this can have on your emotional connection with the world around you. We hope you’ve managed to find a minute to stand still in your local park; to look at, to listen to, and to smell, the things going on around you.

Of course, our spiritual connection to nature is just part of the story. For all species, a physical connection between populations is also vital to their survival. Streams, hedgerows and even appropriately managed roadside verges all offer this connectivity, which results in an intricate network of green corridors across the landscape.

Let’s imagine a wetland made up of a series of ponds connected by channels, and each pond has a thriving population of water voles. If a pond suddenly becomes unsuitable (e.g. it dries up naturally or is intentionally drained), its resident water voles will use the network of channels to disperse from it. If that pond then refills, offering suitable habitat again, water voles will recolonize it.

Similarly, if an incident (e.g. a pollution incident or mink predation) caused all water voles on a particular pond to die out (a ‘local extinction’), that pond would soon be recolonized by young water voles dispersing along the channels from neighboring ponds, once the threat (e.g. pollution or mink) had gone.

This shows that populations are not static within a landscape. Species move to (immigration) and move from (emigration) areas in response to the changing suitability of these areas – local extinctions and recolonization is common. For a species to thrive, the birth rate must exceed the death rate. If local extinctions occur, but the birth rate within remaining populations is low (e.g. due to poor habitat quality or high predation rate), then the likelihood of ponds being recolonized is significantly reduced. This fascinating landscape-scale movement between suitable habitat is known as ‘meta-population dynamics’, and is driven by birth rate, death rate, immigration and emigration.

Of course, meta-population dynamics can only occur within a well-connected landscape. Let’s imagine that same wetland… but things have changed since we lasted visited. Now, instead of a thriving network of well-connected and densely vegetated ponds, only 2 small ponds remain. The others have been drained and have been replaced by housing. The two remaining ponds are on the opposite sides of (what was) the wetland, and there are now busy roads in between them. The inter-connecting network of channels are long gone….

It’s easy to see why fragmentation of landscapes is one of the main drivers of global biodiversity loss. It prevents ecological processes such as meta-population dynamics from happening, meaning that when local extinctions occur, the species isn’t likely to return to that site…

Naturally Native and the Wildlife Trusts are working hard to change this. Our work focuses on reconnecting fragmented landscapes to create a Nature Recovery Network, allowing nature to once again move freely though our region. For details of how you can get involved get in touch at [email protected] or follow us on Facebook.