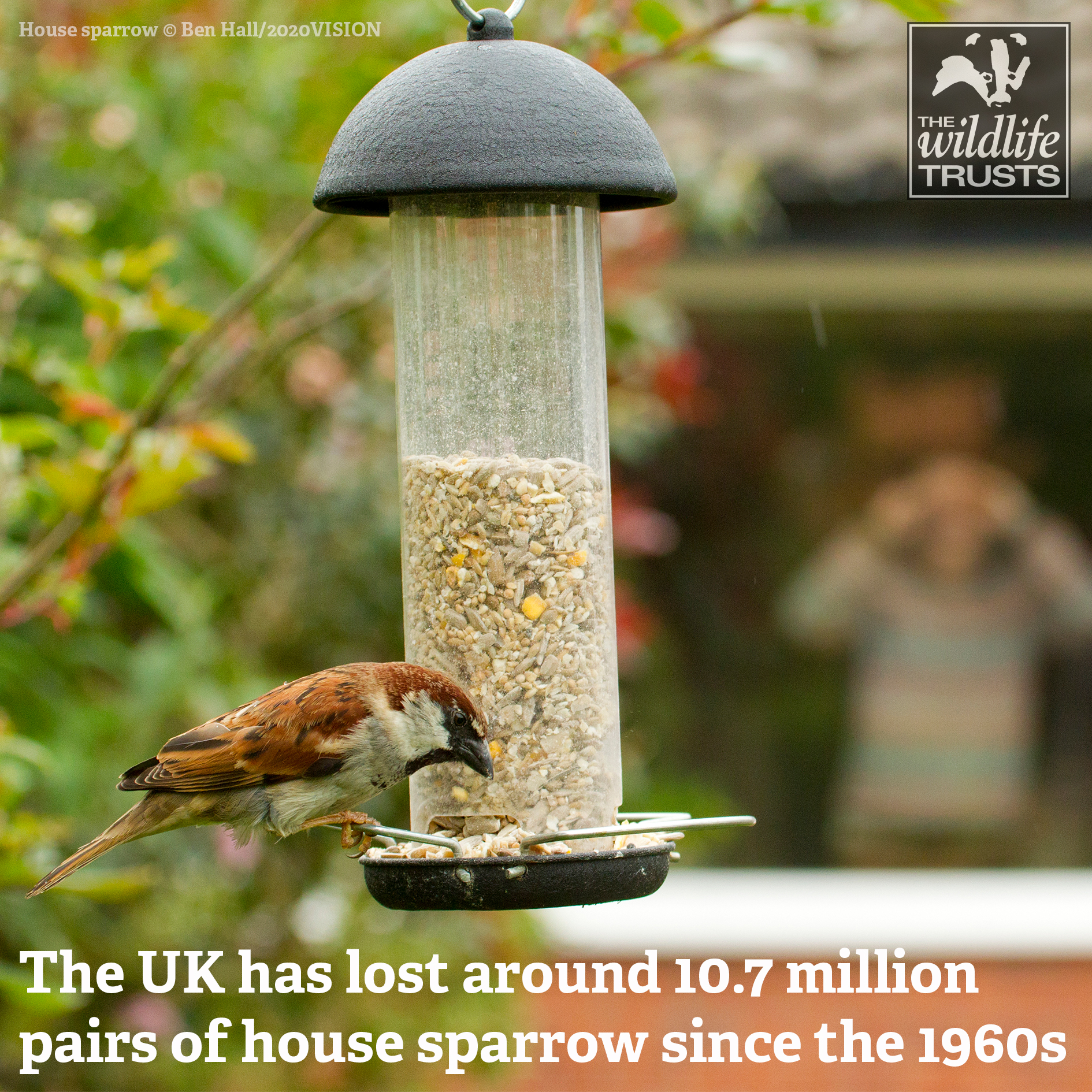 Tom Hibbert, birdwatcher and content officer for The Wildlife Trusts, takes a closer look at one of the UK’s most familiar birds.

House sparrows may not be the most colourful bird in the UK, or the most impressive singer, but they’ve long been one of our favourites, because they live in such close proximity to people. Their friendly little faces are a common sight in many parks and gardens, chirping away from a hedgerow or happily hopping around outdoor cafes and picnic areas, hoping to swoop in and steal any neglected scraps.

When I first took an interest in birdwatching as a student, house sparrows were a constant companion. I’d stand at the window of my tiny attic room, watching their lives play out amongst the rooftops of the town. First, a male perched proudly on a gutter, cheerfully cheeping away. He found a partner, and I watched as they carried grass and feathers into a hole in the brickwork of the adjacent building. Then, one day there were young sparrows clinging to the roof tiles, the bright yellow gape at the base of their beaks still visible, gifting them a perpetual frown.

A decade later and I’m in a different flat, in a different town, but still delighting at the antics of sparrows. I may not have a garden, but I’m lucky enough to have a few sparse bushes beyond my window, which are often alive with these busy birds, preening and chirping as they wait to visit the feeders fixed to a nearby fence. For me, that’s one of the great appeals of the house sparrow – they can bring a touch of the wild into some of our most developed areas.

As lockdown after lockdown severed so many of my usual connections to nature, cutting me off from the forests and nature reserves where I spend most of my free time, these feathered friends were a vital link to the natural world, and so often a lifeline for my mental health. I watched them flit and flirt in the tangles of a scrawny bramble bush, and smiled at the scruffy juveniles snoozing in the sun.

House sparrows are still one of the UK’s most common birds (in fact, they’re the third most common breeding bird, with around 5.3 million pairs), but they are a lot rarer than they used to be. According to the latest report on The State of the UK’s Birds, since the late 1960s we have lost around 10.7 million pairs of house sparrows. This drastic decline has earned them a place on the UK Red List for birds, which essentially flags them as a species in need of urgent action.

There’s not one single cause behind this decline, but an accumulation of issues across different habitats. As our older buildings have been renovated, and homes improved, there are fewer cracks and gaps in which sparrows can squeeze their nests. As gardens, streets and roadsides are tidied, we lose valuable habitat for the insects that house sparrows eat, an issue compounded even more by the use of pesticides. Changes to the way land is farmed are also linked to declines in rural sparrow populations.

But there is hope for house sparrows, with signs of slowing declines and even a slight recovery in some populations in recent years. If we can find more space for sparrows, offering them opportunities to nest, and help our insect populations to recover, our hedges can once again be full of their joyful chirps.

You can help them at home by leaving parts of your garden to go wild, encouraging the insects that they need to feed their young. If you have sparrows visiting, a row of nest boxes or a special ‘house sparrow terrace’ near your eaves could give them a place to nest – they’re gregarious birds that like to nest close to other sparrows. You can also help by supporting campaigns to help insect populations recover, like The Wildlife Trusts’ Action for Insects, because without these our insect-eating birds don’t stand a chance!