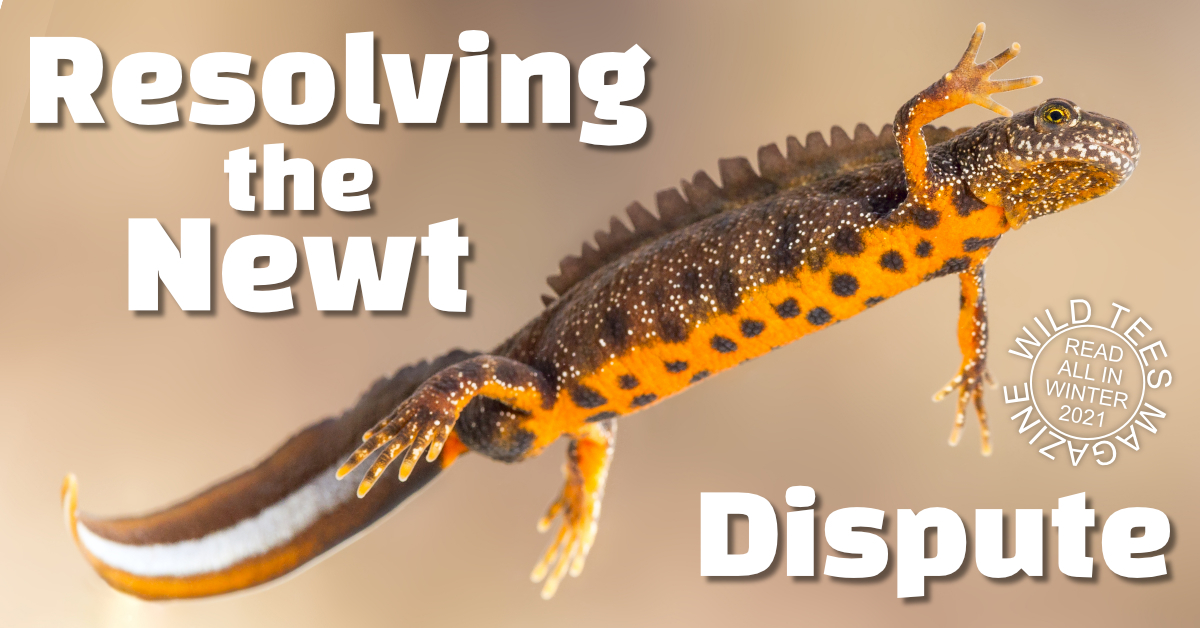 The great crested newt has had a really hard time over the last century. This began with the loss of farm ponds that were no longer needed for watering livestock or other farming operations. Newts moved to industrial ponds within brickworks, tilery ponds, gravel pits and water storage reservoirs at airfields and mines. By the ’80s and ’90s, these sites supported the majority of the Tees Valley’s great crested newts. Eventually, reclamation and repurposing of these adopted habitats forced newts to move once again.

Legal protection was given to the great crested newt in the 1981 Wildlife and Countryside Act. From 1985 a regulated process was introduced to rehome newts whose breeding ponds were threatened by development. The Trust was involved in a number of schemes at Ingleby Barwick in particular. Here, great crested newts were discovered in a series of abandoned farm ponds being swallowed up by the growth of Europe’s largest housing development.

In each case, a mitigation scheme had to be approved by English Nature (the government’s conservation body). The scheme generally required the construction of new ponds on protected greenspace further up the road from the development. An exhaustive process of trapping and catching every individual newt and carrying it to its new home followed.

This scheme was not without its issues: resentment from developers subject to long delays, and conservationists who saw the new ponds were often a draw for swimming dogs, splashing children, and rubbish.

Out of this scenario, Natural England (the renamed, aforementioned English Nature) to create District Level Licencing. This scheme gets developers to pay for four times more habitat than is lost to development. The new habitat is delivered by conservation bodies, like the Wildlife Trusts. Through a single initial payment, it also maintains and monitors the sites.

Natural England has already facilitated the creation of 886 new ponds across the country. The follow-up monitoring and maintenance has demonstrated a 34% uptake in these ponds by great crested newts. These have arrived entirely of their own accord, within the first year. As a delivery partner, Tees Valley Wildlife Trust looks forward to giving further support to thriving newt populations.

If you would like to know more, please visit our website. You could also consider becoming a member. You will receive three issues of Wild Tees each year. This will give access to full articles in full, as well as many more ways to find out about wildlife conservation in the Tees Valley.