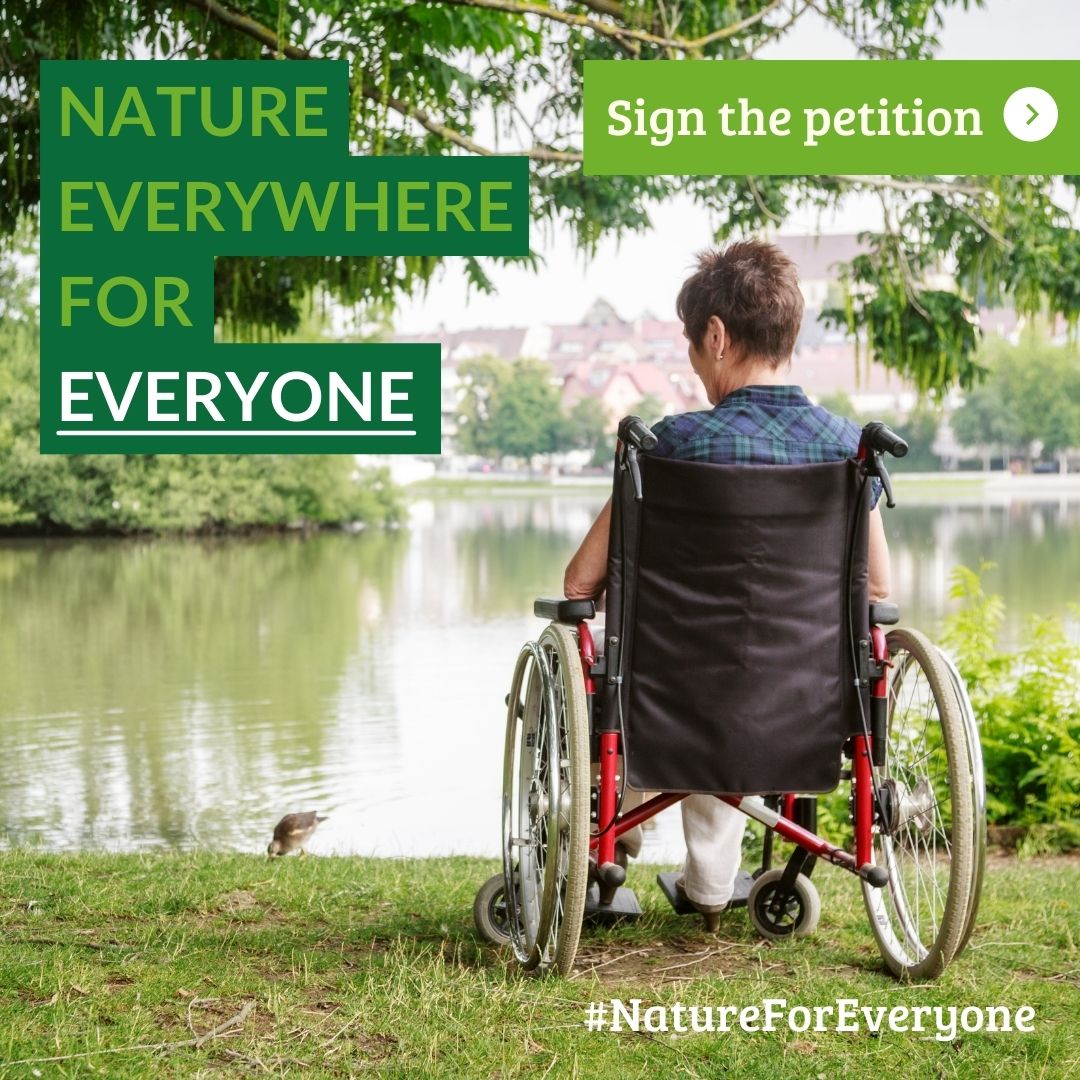 More than 60 nature, planning, health and equality organisations have launched a new ‘Nature For Everyone’ campaign, calling for a ‘legal right to nature’ to be a key component of the Government’s Levelling Up reforms. [1][2]

The calls follow the recent publication of the Levelling Up White Paper, by the Department for Levelling Up, Housing and Local Communities. The coalition behind the campaign have today launched a petition and written to Secretary of State Michael Gove calling for Government to:

New research from Wildlife and Countryside Link on access to nature, has also been published today. This shows: a huge public demand for more and better natural spaces; the massive benefits this could have for our communities (particularly the most deprived and excluded); and the need for national and local leaders to deliver.  See detail below and a full breakdown here. [3]

Members of the public can find out more about the campaign and sign the petition to the Government for a ‘legal right to local nature’ below.

Dr Richard Benwell, CEO of Wildlife and Countryside Link, said: “The Government says levelling up means pride of place and equal opportunity. But for many people, this ends the moment they step out of their door. So many lives are worsened or shortened by disconnection from nature. So many could be improved by the chance to get active, get together and get in touch with nature. Unless levelling up includes a legal right to healthy local natural spaces, it will surely fail. This is the Government’s chance to show that the benefits of nature are truly everyone’s to enjoy.”

﻿Mark Rowland, CEO Mental Health Foundation, said: ﻿﻿”Our research and that of others has demonstrated that connection to nature is fundamental to good mental health. We are facing a double threat from significant biodiversity loss in the UK and enduring inequality in access, which is leaving millions of people with little opportunity to benefit from nature. It is not just the frequency of contact with nature that matters. The quality and abundance of nature is also vital in terms of the mental health benefits and that is why levelling up must mean delivering on nature’s renewal and a clear pathway to equitable access to nature across the UK.”

There is strong evidence that accessible nature-rich spaces boost our physical and mental wellbeing, and reduce mortality. Yet one in three people in England cannot access nature near their home. This is a particular issue for our poorest  communities and ethnic minorities who are twice as likely to live in a neighbourhood without nature-rich spaces. At the same time, wildlife is declining across the UK, with the UK in the worst 10% of countries worldwide for nature loss.

This lack of accessible natural space is a key inequality which must be addressed in levelling up living standards across the country. New research published today shows that two-thirds of British adults (66%) say more or better natural spaces would increase their quality of life. This is even higher among those in nature-deprived areas (i.e. those not within 5 minutes walk of natural space), with 85% saying it would raise their standard of living.

Improving and creating natural spaces would give particularly big benefits to those on low incomes and ethnic minorities, who are most likely to live in nature deprived areas. With the poor-quality of many existing parks and other natural spaces a huge problem. The new findings reveal 81% of those living in nature-deprived areas would be more likely to visit local natural spaces if they were in better condition, and 7 in 10 (68%) would be likely to exercise more with better nature access. Younger people and families are the most likely to say that they would exercise more if there were more and better accessible nature-rich spaces nearby, which is important given rising youth obesity rates.[4]

The physical and mental health benefits of increased access to nature would also benefit our health service, local economies and help towards achieving 2030 nature restoration targets. A ‘Nature for Everyone’ urban fund of £5.5 bn over 3 years would deliver £200 billion in NHS savings, create 40,000 jobs, and create access to nature-rich spaces for 3,500 deprived communities. Improving the quality of local natural spaces is also vital to help meet Government targets to protect 30% of land for nature by 2030 and halt the decline in species by 2030.

BBC’s Springwatch presenter, biologist and Vice President of The Wildlife Trusts, Gillian Burke said: “Just the sound of birdsong, a bubbling stream or the wind through the leaves can lower a heart rate, ease anxiety and make us take a deep breath.  Spending time in nature has multiple mental and physical health benefits yet, for far too many of us, green spaces are simply out of reach. One in five people in England do not have a garden, or access to parks and open fields.  Nature-rich spaces FOR ALL are vital to create healthy communities, to reduce stress on our NHS and to help our struggling wildlife to recover. ALL neighbourhoods need nature, and the Government must deliver.”

Craig Bennett, Chief Executive of The Wildlife Trusts, said: “Having access to wild places and wildlife shouldn’t be a privilege, but a part of everyday life. We know how much people treasure time spent in nature near where they live but for many communities this simply isn’t possible. The most deprived areas have nine times less green space than the wealthiest – and poorer areas are where people’s health is the worst.

“Our towns and cities have a huge role to play in nature’s recovery. We need to create and join up habitats, enabling species to recover and benefitting people too. It is critical that nature is at the heart of all planning and development, for wildlife, communities, and climate.”

Not only are the benefits of nature-rich neighbourhoods clear, there is also soaring demand for nature access across the country. Visits to urban parks and other greenspaces nearly doubled in the decade before the pandemic, from 1.2bn visits in 2009-10 to 2.1bn in 2018-19. Demand has only increased since the pandemic, with the public now placing an even greater premium on local nature. Our new findings show more than 8 in 10 British adults (83%) feel it is more important to have access to local natural spaces since the lockdowns and working from home.

While urban areas often have the lowest levels of natural space, lack of access to nature-rich spaces is also an issue in rural communities. Even in areas that do have thriving natural spaces there are often barriers to accessing them such as difficult transport links, poor infrastructure, such as lack of road crossings, and lack of rights to access.

Additionally, many of our natural spaces are being lost to development, with a dramatic loss of around 11% of our urban greenspace alone in the last 15 years. [5] The new findings today show that almost half (49%) of British adults say that natural spaces in their local area have been lost to, or are currently at risk from, development, rising to 7 in 10 people in nature-deprived areas.

Our new research shows that: 80% of the British public support a legal right to local nature; 83% want greater protections to prevent valued natural spaces being lost to building development; and 85% say it should be a priority for all new housing developments to include accessible natural spaces. The ‘Nature For Everyone’ coalition is calling on the Government to respond to this huge public demand, and need, for more local accessible nature-rich public spaces and better planning protections for nature, by adding a ‘legal right to local nature’ to forthcoming Levelling-Up legislation.
Members of the public can find out more about the campaign and sign the petition to the Government for a ‘legal right to local nature’ below.