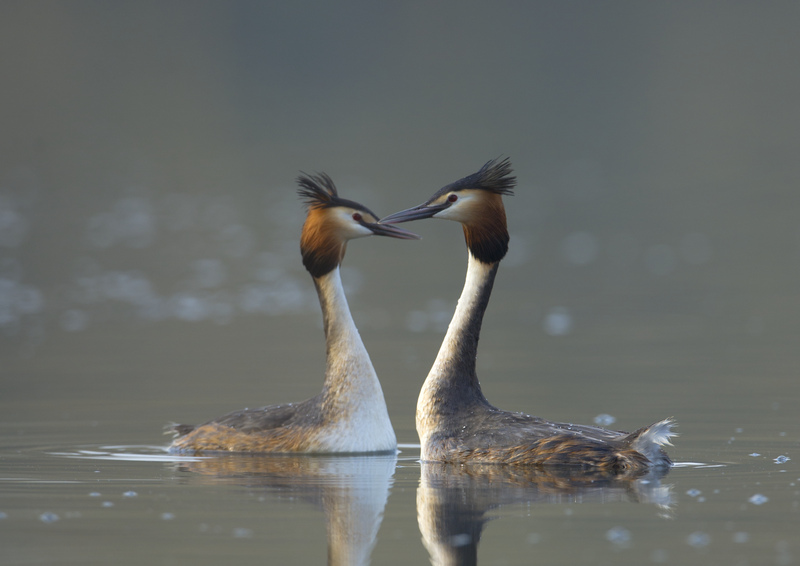 From dressing to impress to strutting your stuff on the dancefloor, there are plenty of approaches to catching the eye of a potential partner. For wildlife, finding a mate is a serious business, and animals invest a lot of energy in making the right match. Let’s take a glance at just a few of the techniques employed by animals looking for love…

Sing it to win it

For centuries, would-be-suitors have serenaded their love interests. But birds have been doing it for even longer! Spring is famous for the explosion of sound as birds start to sing to establish territories, ward off rivals, and most importantly, attract a mate. The complexity of the song varies between species, but beauty is in the eye of the beholder. To a female chiffchaff, the male’s repetitive, two-note refrain is clearly more appealing than the mellifluous, flowing cascade of the similarly-coloured willow warbler.

Our most celebrated songbird must be the nightingale, though sadly his song is now missing from much of the UK. His verses are short, but his rich repertoire and flair for improvisation have earned the praise of poets and musicians throughout the ages.

Some birds are excellent mimics and may borrow sounds from the calls or songs of other species. You may have heard of the starling’s mastery of mimicry, copying the sounds of telephones, reversing lorries and even human speech, but did you know the common redstart is also a capable copycat? A study in Spain recorded a singing redstart and identified mimicry of over 50 different birds in less than an hour!

Birds may be our most well-known singers, but they aren’t the only animals to profess their interest through sound. Common frogs produce a chorus of soft, purring croaks – like the distant sound of revving motorbikes. There are songs in our seas too, and not just from whales and dolphins – sound can be an important part of courtship for fish. Male painted gobies, for instance, build nests beneath shells, then advertise their construction by pairing visual displays with a series of drumming and thumping sounds.

It’s not just the vocalists that put on a performance to pull the perfect partner. Whether it’s a tantalizing tango for two, a solo show that’s sure to stun, or even a groovy group number, dancing is everywhere in the animal kingdom.

The classic example is the great crested grebe. These birds are the epitome of elegance, with their long, slender necks, demure plumage, and black and orange crests fanned into a fabulous feather boa. Each spring, they take to the dance floor – well, lake’s surface – and deliver a dazzling display. The build-up involves braying calls, posturing, preening and synchronised head shaking, but it’s the showstopping finale that everyone’s here to see.

The two birds dive beneath the water, resurfacing with beaks brimming with weeds. They swim towards each other and, as they close the final few inches, rise from the water like a ballet dancer en pointe. Breast to breast they hold this rigid, vertical posture, their webbed feet paddling passionately to keep them upright. Throughout this dance, their heads swivel from side-to-side, as if searching for the judges’ scores – tens all-round, surely?

Grebes aren’t the only birds with brilliant moves. Mute swans use their long necks, bending and bobbing them in a slower, more stately dance, their heads sometimes coming together so that the elegant sweep of their necks forms a heart-shaped frame.

For black grouse, dancing is best done as a group. But their dawn displays aren’t collaborative pieces, they’re dance battles! Males gather at favoured sites and strut their stuff, each one vying for the attention of the females watching from the wings. There’s foot stamping and tail fanning, posturing and jumping, all to the soundtrack of their own soft, bubbling calls and rasping croaks. Not content to let their moves do the talking, the dancers sometimes come to blows as they bicker over the prime spots.

This communal display is known as lekking and is also shared by two much rarer breeding birds in the UK – the capercaillie and the ruff. But it’s not just birds that do it, there are other animals that look to find love in a lek, including insects. Male ghost moths gather in the gloom of dusk, sweeping low over the vegetation in a pendulous display flight, as if tethered to the end of an invisible string. Their pale wings catch what little light remains so that they may also catch the attention of attending females. They further enhance their appeal by releasing pheromones as they dance, for a perfect, perfumed performance.

When a male scorpionfly approaches a female, he presents her with a gift – a box of chocolate perhaps, or some nice flowers? No, he offers a dead insect (sometimes scavenged from a spider’s web), or a ball of his own spit, for the female to eat during intercourse. A welcome nutritional boost to invest in egg production!

Many species offer gifts of food to their partner – often it’s a profession of their prowess as a hunter, proof that they can provide for their offspring; or simply to make sure the female has all the calories she needs to produce healthy eggs or young. Some gifts may come with ulterior motives. There’s research to suggest that female scorpionflies that receive larger gifts may be less likely to go on to mate with another male!

These are a just a few examples of the singing, dancing, and gift-giving animals we’re lucky enough to have in the UK. When it comes to wild wooing, there’s a whole world of weird and wonderful strategies out there to discover!