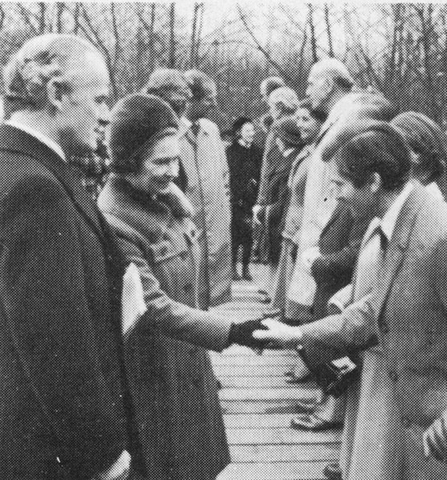 We are extremely saddened by the death of Her Majesty The Queen and send our deepest sympathies to the Royal Family.

Queen Elizabeth II dedicated her life to public service and was celebrated for her passion for the outdoors, the countryside and rural life, lending her support to the work of The Wildlife Trusts and many environmental charities over the years.

The Wildlife Trusts are proud to have been a part of Coronation Meadows – an inspirational idea to mark the 60th anniversary of The Queen’s Coronation in 2013 which was spearheaded by our patron, King Charles III, when he was known as The Prince of Wales.

His Majesty was concerned that so many wildflower meadows had been lost over the preceding sixty years. He decided to celebrate the anniversary of his mother’s Coronation by working with Plantlife, The Wildlife Trusts and the Rare Breeds Survival Trust to identify remaining ancient meadows, gather their seed, and create new ones near to the donor site. This natural seeding technique helps to preserve the special local character of meadows.

Queen Elizabeth II dedicated her life to public service and was celebrated for her passion for the outdoors, the countryside and rural life

So far, 90 beautiful new meadows have been created covering 1,000 acres. They are brimming with a fantastic array of wild grasses and plants – from rare orchids to bird’s foot trefoil and devil’s bit scabious – which provide vital sources of nectar for bees and butterflies, and important habitat for a wealth of other wildlife.

More recently, this year, The Wildlife Trusts announced a ground-breaking initiative, Nextdoor Nature, which will leave a lasting natural legacy in honour of the Queen’s Platinum Jubilee. Thanks to funding from The National Lottery Heritage Fund, Nextdoor Nature is bringing communities together to help nature flourish where they live and work.

Her Majesty The Queen was also patron of Norfolk Wildlife Trust.

“The Wildlife Trusts are deeply saddened by the death of Her Majesty The Queen.

“Her Majesty will be remembered fondly as a devoted servant of this country and its people. She had a passion for the British countryside and rural life, and enjoyed visiting communities and wild places over many decades.

“We are proud to have created a myriad of new wildflower meadows in her honour for the 60th anniversary of her Coronation – a huge team effort that many Wildlife Trusts began nearly a decade ago.

“The Wildlife Trusts are pleased to have recently embarked on another project – Nextdoor Nature – in The Queen’s honour this year. This wonderful scheme will empower hundreds of communities all over the UK to choose how they want to improve their neighbourhoods for people and nature.”

“People will be able to delight in these meadows and greener neighbourhoods for generations to come – such places are inspirational living tributes and part of a fitting legacy for the many years of service given by Her Majesty The Queen.”

“Our thoughts and sympathies are with our Patron, His Majesty, King Charles III, and his family, at this sad and difficult time. The Queen was a remarkable woman who dedicated her life to our country and its people. Her sense of duty and steadfastness is something we can all learn from, and she will be deeply missed.”