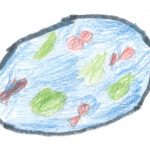 Things that live in the pond at Hardwick Dene:

Tadpoles: These eventually grow into frogs! Keep your eyes open during spring time at the Dene for Frog Spawn.

Newts, Frogs and Toads all live both in and out of the water. Female newts are approximately 130mm and males grow to around 80mm. Both tend to eat insects. 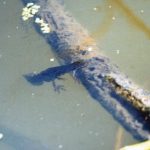 Believe it or not Hardwick Dene Pond is home to leeches! They eat blood and have a sucker at the front of their body so they can attach themselves to the thing they want to eat!

Many invertebrates can live in a pond including fresh water hoglouse (related to the woodlouse) pond snails and water beetles.

A great way to find out what different insects and creatures live in a pond is to go pond dipping, if you would like to try this please click here to download an instruction sheet in PDF format.

Fish in the pond:

The fish we have in the pond are; Roach, orfe, sticklebacks and carp. Sticklebacks have 3 spines on their back and the females can lay up to 400 eggs. 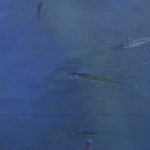 Things don’t just live in the pond at Hardwick Dene, they also live around or on top of the pond.

Dragonflies and damselflies start their life in the pond as nymphs (the baby form of some insects) and both in nymph form and adult form, eat other smaller insects. They are the among the most ancient of creatures, and have been around for millions of years. One of the easiest ways to tell the difference between the two is if you manage to catch a glimpse of the insect resting, the wings of a dragonfly will be open when resting and a damselfly’s wings will be closed. Also, a dragonfly has a strong flight, while a damselfly is more fluttery. If you are lucky enough to get a closer look, another way to identify them is to look at the position of their eyes; dragonfly eyes- close together, damselfly eyes- apart. 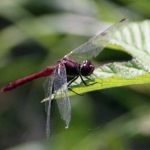 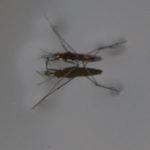 Plants around the pond

There are several types of plants in the pond including water mint, brooklime, flag iris, sedge and common reeds. Plants are important as insects will feed off the plants and birds will nest in them. Common reeds will improve the water quality of the pond as the roots act as a water filter.