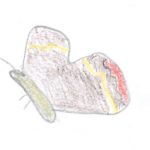 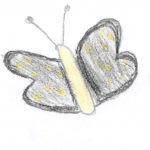 Butterflies  are invertebrates, parts of a large group called the arthropod

Butterflies themselves are fully grown insects and do not grow any further once they have reached this stage. 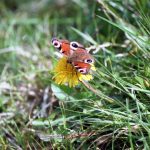 The white-letter hairstreak is a very special butterfly, this is because it one of the  more-elusive butterflies, you will rarely see it as it flies around the treetops. It gets it’s name from the letter W which is made up from thin lines of white on the underside of it’s back wings.

It feeds on Elm Trees and the female lays her eggs on mature elm trees too. When Dutch Elm Tree Disease hit the UK in the 1970’s many of the Elm Trees were wiped out. As a result of this the White Letter Hairstreak butterfly suffered and it was feared that the butterfly would become extinct.

The butterflies can sometimes be seen flying down from the treetops if you are lucky. 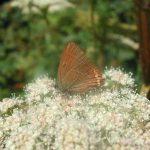 The Speckled Wood is a dark brown butterfly with creamy- white patches on it’s wings.

This butterfly is found mainly in woodland which is why Hardwick Dene makes the perfect habitat. It’s quite a common butterfly which likes to perch in sunny spots.

The caterpillars of this butterfly are well camouflaged as they are green in colour and sit on the underside of leaves feeding.

Keep a look out for the Speckled Wood in July and August.

This butterfly gets it’s name from the markings the male has on it’s wings. They have white wings with bright orange wing tips. Keep a look out for them near white flowers in the Dene as males like to investigate anything white. The females have white wings with black tips. The underside of both male and female has a yellow and black pattern which works as camouflage when resting on plants.

The Orange Tip is a spring butterfly and you are most likely to see it near the watercourses in the Dene. 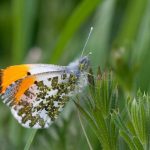 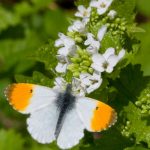