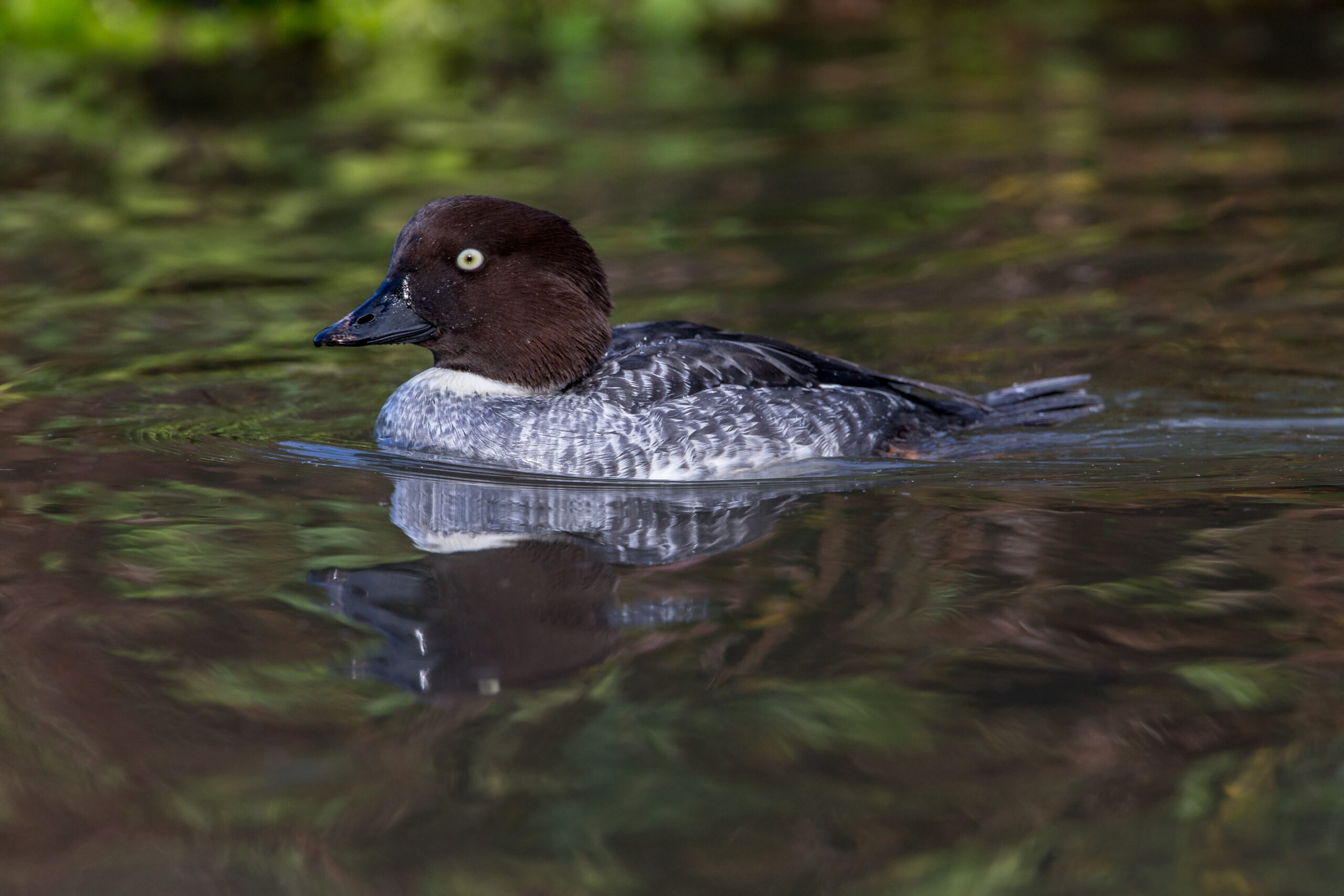 What are diving ducks?

Ducks can be split into two broad groups: dabblers and divers. Diving duck is a loose term that covers a wide range of ducks who feed mainly by diving under the water, whether it’s to chase fish, scoop up insects or graze on tasty aquatic plants. Some diving ducks prefer freshwater and are often found on rivers, lakes and reservoirs, others prefer the sea and are usually seen from the coast.

Which diving ducks am I likely to see?

Diving ducks can be seen year-round, but winter brings a boost in numbers as birds arrive from Northern Europe and Russia. Some species, like scaup and smew, are mostly winter visitors and are rarely seen during the summer.

This quick identification guide covers the more widespread species and some of the rarer diving ducks you may encounter around the UK. Most descriptions refer to birds in breeding plumage, which is the plumage usually seen from autumn through spring. After breeding, they start moulting and males enter an often confusing “eclipse” plumage, where they usually resemble females.

Our most common diving duck; found on almost any freshwater body and often seen in parks and on urban waterways. Males are easily recognised by their black and white plumage and the long tuft of feathers on their head.

Females are much browner than males. The tuft on their head is much smaller, but still obvious. They sometimes have white feathers around the base of the bill, similar to scaup, but female tufted duck bills have a broad black tip with a ‘hint of’ pale band behind it.

Like the tufted duck, but larger with a rounder head and no hint of a tuft, and only a small amount of black at the bill tip. Males have a pale grey back; females are mottled grey-brown with a white blaze on the face. They are winter visitors and are usually coastal, forming large flocks at some Scottish sites, but can turn up on inland lakes and reservoirs.

This handsome duck is an uncommon breeding bird in the UK, but a very common winter visitor. Males have a pale grey body with black on the breast and stern, a bright chestnut head with red eye, and a black bill with a blue-grey band across it.

Female pochards aren’t as brightly coloured as males. They’re mostly grey-brown, with a greyer back and a dark brown head. Young birds resemble females but are more uniform grey-brown. The head shape is distinctive, with a peaked crown and sloping forehead that runs smoothly into the curve of the bill.

These ducks became established in southern-central England after escaping captive collections. Males have a black body with white flanks and a brown back. The head is rusty-orange, often brighter at the top, with a bright red bill. Females are a soft brown, with white cheeks, a rich brown cap and a grey, pink-tipped bill.

Goldeneyes breed in the Scottish highlands, but in winter can be found on lakes, large rivers and coasts around the UK. Males are dazzling with a black and white body and a large, rounded head. The head is glossy and can appear green or purple depending on the light, with a golden eye and a white patch behind the bill.

Females have a mostly ash-grey body with a brown head and a white collar. The eye is pale yellow and the bill is dark, usually with a yellow band across it whilst in breeding plumage. Young birds resemble females but are duller and lack the white collar.

A large, heavy seaduck with a wedge-shaped bill. Males are strikingly black and white, with a green nape and a black cap. Females are brown with dark barring. They are present year-round off northern coasts, often gathering in large rafts. In winter they wander south and can be seen off other parts of the UK. It is extremely rare to find one inland.

Sawbills are a group of diving ducks with saw-like serrations on their slim bills, which help them catch and hold fish.

The smallest sawbill is a rare winter visitor to the UK. Males are dazzlingly white, with black markings including a neat black mask behind the bill. Female and immature smews look very similar to each other and are collectively referred to as redheads. They’re mostly grey, with white cheeks and a dark chestnut nape, crown and forehead. Most UK sightings are of redheads.

A large, long-bodied duck that breeds on rivers and upland lakes in north and western Britain. In winter, they visit lakes, rivers and reservoirs in other regions and can roost in good numbers on suitable lakes. Males have a dark, bottle-green head, red bill, black back and largely white body. In flight, white patches cover most of their inner wings.

Females are greyish, with a dark red-brown head that contrasts sharply with the white chin patch and the whiter neck (compare with the subtle blending on a red-breasted merganser’s neck). They have a long crest that often hangs behind the head but can be raised into tufts. Immature birds resemble females.

Slimmer than goosanders, with a narrower bill. Males have a glossy green-black head with a punk-like crest, white collar and streaky brown neck. The back is mostly black and the flanks are grey, with black breast sides showing distinctive white spots. In flight, they have less white on their wing than a goosander. Mostly coastal.

Females are grey-brown with a warmer brown head. They are similar to female goosanders, but have a thinner base to the bill, a less reddish-brown head and a shorter, spikier crest. A key difference is that the head colour blends subtly into the paler neck, whereas goosanders show a sharp distinction.