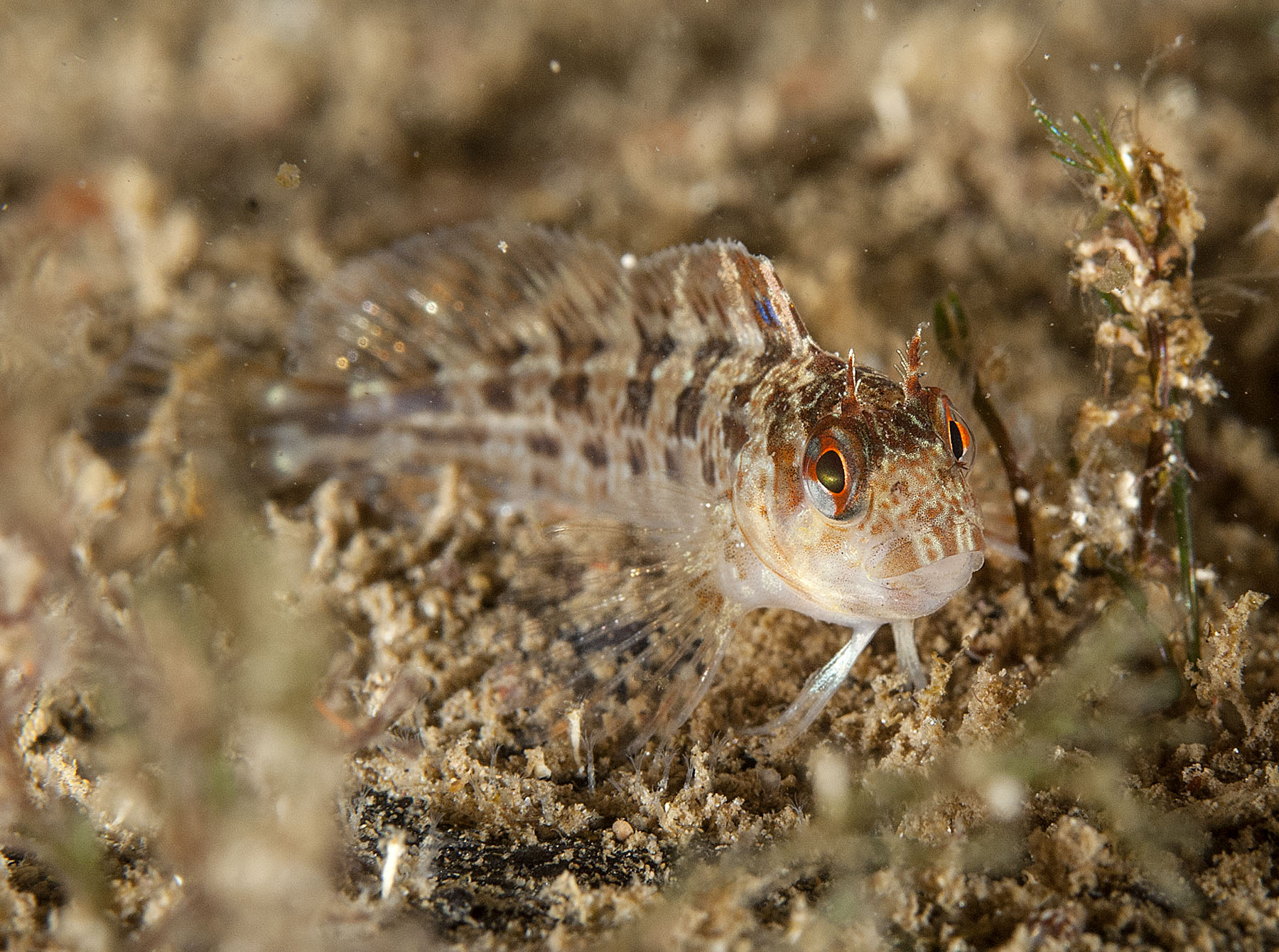 Meet the tompot blenny – ‘The small fish with a big personality’

How best to introduce the tompot blenny? Most people who explore the seashore meet the tompot’s relative, the common blenny (also known as the shanny), which is the small green-brown fish often found in rock pools. Shannies dash for cover when disturbed but, if approached carefully, can be seen watching you with their large, high-set eyes and quizzical expression. If you imagine taking a shanny and adding a pair of impressive bright red head tentacles, jazzed-up colours and tons of attitude, then that’s a tompot blenny!

Tompot blennies are occasionally found at the bottom of the shore on a very low tide, but look a bit sad if they are out of the water because their head tentacles flop over their eyes. They are much more likely to be seen in their full glory by snorkellers and SCUBA divers peering into holes and crevices on shallow rocky reefs.

As is usual with blennies, males hold a territory where they fertilise and then guard eggs laid by visiting females. A successful male will welcome several different females over the course of the breeding season, between March and June, while one female will visit several different males. She thus avoids, as the saying goes, ‘putting all her eggs in one basket’!

This already sets the scene for a steamy soap opera, but things get more dramatic because all this activity is far from random. Both sexes put a lot of energy and resources into breeding; the females producing their eggs and the males then working hard to guard those eggs from predators and keep them healthy using special glands. Those resources are precious and need to be used wisely, so females are choosy about who they visit and males are selective about who they host. That means there is a complicated courtship, with those snazzy head tentacles probably playing a part, which we are only just starting to understand.

My total fascination for tompot blennies arose after I got the feeling I was meeting the same fish on regular visits to the same patch of reef. I then discovered that I could recognise individuals with certainty, using close-up photographs of their facial markings. I got to know these individuals and my research began.

As well as referring to them by number for the science, I gave them names to help me remember and describe them! In one patch of reef, the names all start with ‘B’ to go with blenny while, in another, I link them to their precise locations. All the tompot blennies have different personalities. Bobby, for example, is shy and usually hides at the back of his crevice when I visit; Brett rushes out to confront my camera, biting off pieces of seaweed and spitting them out in front of me to show how tough he is. ‘Displaying prowess’ is the proper term for this boisterous behaviour!

Recognising and naming individual blennies might sound rather eccentric, but it is an absolute ‘game changer’ when studying their behaviour. It means you can work out exactly who is visiting whom and how long individual males keep their territory. These little guys (usually less than 20 cm long) are tenacious and Bradley, for instance, held the same spot for seven years! It wasn’t previously known if they stayed in the same location for more than one breeding season.

I also discovered ‘sneaker’ males that enter the territories of established males and covertly fertilise eggs laid by females while the homeowner is distracted. We also found out that ‘sneaker’ males eventually become bourgeois males – that is, a territory-holding blenny.

The eggs that the male guards so fiercely hatch into tiny larvae that drift with the plankton for about two months. They then settle back on the seabed as miniature versions of the adult (around 2 cm long) in August and September. One of our biggest surprises was seeing two of these youngsters having a fight, just like adult males vying for territory. We expected the tiny fish would be too busy hiding out of harm’s way for such shenanigans, but it seems the tompot blenny’s feisty attitude starts very young!

Their charisma, striking looks and individualism make tompot blennies brilliant advocates for our marine environment and the conservation issues it faces. They have narrated a children’s book (‘Benny the Blenny’s Shallow Sea Adventure’), starred in important Wildlife Trusts campaigns and featured in numerous media articles about Britain’s spectacular marine life. ‘The small fish with a big personality’ indeed!

Paul Naylor is the author of Great British Marine Animals, which uses his fantastic underwater photographs to offer an insight into the lives of many of our more common animals. The fourth edition was released this June.