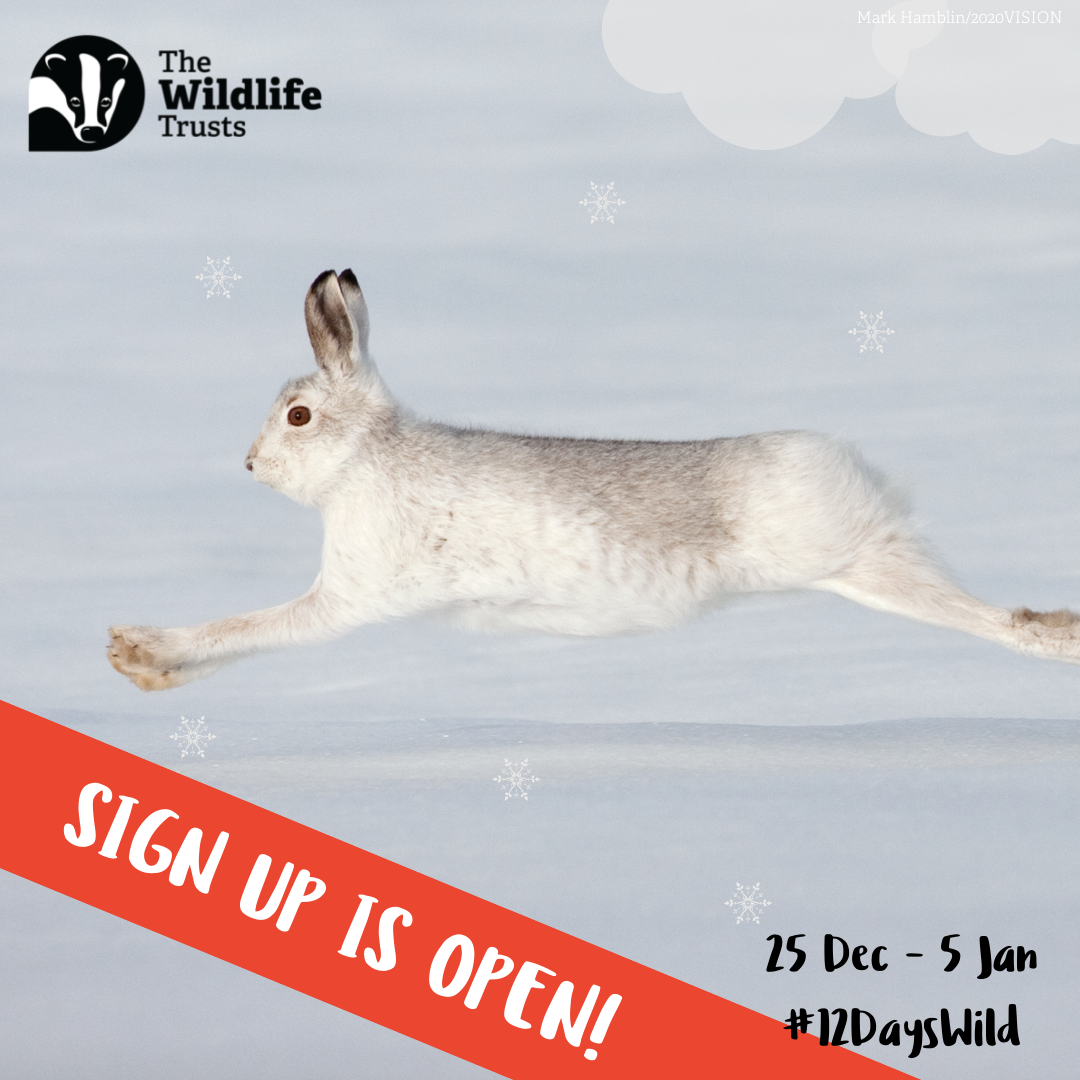 December is here. It’s time for one of the most magical moments of year, the highlight of the winter calendar – that’s right, 12 Days Wild! Get ready for some festive fun with our winter wildlife challenge. The goal is to do one thing a day from 25th December to 5th January. If you haven’t signed up yet, there’s still time to do it here!

If you’re looking for some inspiration for winter wildlife to discover each day, why not turn to the old festive favourite, 12 Days of Christmas? We’ve given the lyrics a little Wildlife Trusts makeover…

A partridge with no pear tree

There’s every chance of spotting a partridge this December, but you’re very unlikely to find one in a pear tree. Two species of partridge can be seen in the UK: grey partridge, and red-legged partridge. Both favour farmland, where they scurry across fields and along the bottom of hedgerows. Partridges are often found in a small group known as a covey.

By now, our turtle doves should be sunning themselves in sub-Saharan Africa. But luckily, some of their close relatives stay behind. Collared doves are year-round residents, common across most of the UK – an impressive feat considering they only arrived here in the 1950s. You might even spot one without leaving your home, as they’re regularly seen around towns and villages. Collared doves often reveal themselves through sound. Their wings whir loudly in flight, and they tend to call as they land or take off. The male’s familiar song is a deep, cooing ‘ooh-OOO-oo’.

A visit to most parks with a lake should reward you with a sighting of a moorhen. These plump black birds with a bright red beak are often heard before they’re seen. Their rich repertoire of calls includes an explosive, bubbling ‘brrrook’ and a squeaking ‘ki-kek’’. As they walk or swim, they have a habit of flicking their tail, flashing the white feathers beneath. You could also spot them on ponds, rivers, and canals.

We’re spoilt for choice on day four! Most birds call throughout the year, though only a few in the UK regularly sing all winter. Robins are a festive favourite, appearing on plenty of Christmas cards and decorations. Their beautiful trickling, whistling song can brighten up even the greyest winter day. It might be a pleasing melody, but if we could understand the lyrics they’d almost certainly be darker. In winter, both male and female robins sing to defend a feeding territory. They’re claiming all the food in the area, and warning any other robins to back off or face a fight.

Gold rings are nice and all, but we think goldcrests are even better! Despite being Europe’s smallest bird, huge numbers of these mighty migrants battle their way across the North Sea each year to spend the winter in the UK. Their sweet “siii” calls are so high-pitched that some people are unable to hear them. They’re often found in groups, sometimes tagging along with flocks of tits. They’re fond of conifers, where they flit around plucking insects from between the needles. Goldcrests aren’t shy birds and will happily feed a few feet away from an admiring birdwatcher, but they’re so restless it can be hard to keep your eye on them!

In winter, there’s no shortage of wild geese to discover. The familiar, noisy Canada and greylag geese seen throughout the year are joined by visitors from more northerly breeding grounds. This includes hundreds of thousands of pink-footed geese and brent geese. Pink-footed geese often feed on fields close to the coast, whilst brent geese prefer to graze saltmarshes and mudflats. There might even be some geese a-laying! Egyptian geese, a resident species introduced from Africa and spreading across Britain, can sometimes be seen with goslings in January or rarely even December.

Where to see pink-footed geese

Where to see brent geese

As with geese, our swan numbers swell in winter as two other species join the mute swans that can be seen all year. Around 20,000 whooper swans flock to the UK from Iceland. They keep in contact as they fly with loud, trumpeting calls that earned them the name whooper. They can be recognised by their bright yellow beak with a black tip. Bewick’s swans also arrive for the winter, though in much smaller numbers. They’re slightly smaller than whooper swans, with less yellow on their beak.

A single starling is already a work of art, with a constellation of pale spots covering its dark, glossy feathers. But bring together a few thousand starlings and you have one of nature’s greatest spectacles. In winter, starlings roost in flocks for warmth and safety, often in reedbeds. Each evening, they gather in huge numbers near their roost site. But, before they turn in for the night, the flock often takes flight and spends some time swirling through the sky. This is known as a murmuration. They seem to move as one, a black blur that stretches and twists, painting shapes in the air. Then, suddenly, they’ll drop down to roost and the show is over.

Where to see a murmuration.

There are several birds across the world renowned for their dancing, from the moonwalking manakins of Central America, to New Guinea’s spectacular birds of paradise. But the UK has its own contenders for the bird ballroom title: great crested grebes. Pairs bond with an elaborate courtship display. It’s definitely a dance for two, as partners face each other and begin with some stylish head shaking. When the moment is right, they’ll grab a beakful of pondweed and meet breast-to-breast, rising from the water. This famous ‘weed dance’ is most often seen in late winter and early spring, but pairs can begin displaying in January or even December.

Where to see great crested grebes

We’ve seen swans and geese so time for some ducks! Winter is a wonderful time for duck watching, with huge numbers of several species flocking to lakes and reservoirs across the UK. Listen out for the whistles of wigeon, which are often found in large groups grazing on grassy lakeshores. Look out for the smaller teal, which flash glorious green patches on their wings as they flap. Shoveler spin in circles, sweeping their bizarre bill through the water, and pintail upend entirely, pointing their long tail towards the sky.

How to identify different dabbling ducks

Sandpipers are a family of wading birds named for their loud, piping calls. There are plenty of species that can be seen in the UK in winter, though many don’t have sandpiper in their name. The redshank is one of the noisiest, known as the sentinel of the marshes. At the slightest provocation they burst into a series of calls – whether they’re alarmed, displaying, or just announcing their presence in flight. They spend the winter around our coasts, with some heading inland in spring. If you can’t get to the coast, look out for green sandpipers on inland waterways. They often skulk in ditches, or pick their way around the muddy margins of lakes.

Where to see wintering waders.

Why not end 12 Days Wild in pursuit of one nature’s most passionate percussionists? Take a walk in a woodland and listen for a rhythmic rattle amongst the trees. That’s the sound of a woodpecker banging its beak against the bark! Both male and female woodpeckers drum. It’s how they claim their territory or communicate with their mate. You’re most likely to hear a great spotted woodpecker – a rapid drum roll of up to 20 strokes in under a second, accelerating but growing quieter towards the end. Look for them on dead trunks or branches, which provide a more resonant rattle.

Where to hear woodpeckers