The water vole, once one of the most enigmatic animals on our river banks has suffered 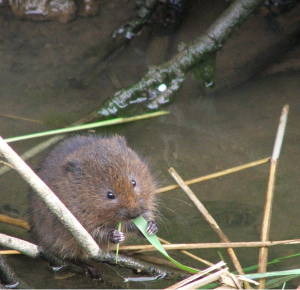 serious decline in numbers across Britain. Most commonly recognised as Ratty from The Wind in the Willows, the very survival of the water vole is now threatened within out waterways. Since the 1970s there has been a perceived decline of 95% of British water vole numbers. Decline has been linked to habitat loss, habitat fragmentation and predation by the invasive American mink. Despite this there is hope for the water vole within our urban waterways. The Middlesbrough Becks in particular are proving to be an ark for the continuation of the water vole as a species.

These sites however are rapidly being lost due to their lack of management for water vole populations. Scrub encroachment, erosion and the changing bank profile are threatening to fragment the habitat available for our remaining water voles. To address this, Middlesbrough Environment City established the £50,000 BiffaAward funded West Middlesbrough Water Voles Project, currently being delivered in partnership with Tees Valley Wildlife Trust, Middlesbrough Council, The Environment Agency and Northumbrian Water Ltd.

The project aims to “improve habitat and water quality along the stretches of Bluebell Beck, Newham Beck and Marton West Beck in Middlesbrough, to provide biodiversity benefits, with particular emphasis on maintaining and expanding water vole populations.” To achieve this, the Living Waterways Project has taken on the task of creating 1.2 hectares of wetland habitat leading to the improvement of 547 metres of the selected water courses to re-establish the populations of water vole that have been lost in recent years.

Upon completion the West Middlesbrough Water Voles Project will compliment the wetland wildlife benefits of Living Waterways previous project in the area as well as the proposed future project at Trimdon Avenue. 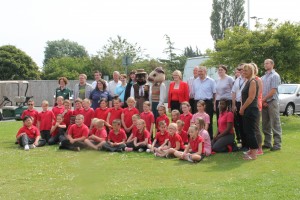 The focus point of the project takes place along the banks of Newham Beck and Marton West Beck within the confines of Middlesbrough Municipal Golf Course. The official launch was held on the 12th of July 2013. To celebrate this, an event was hosted by MEC at which local councillors Julia Rostron & Nicky Walker were invited to play a round of golf with a local vole and an otter. Pupils from Sir Thomas More RC Primary also came along and were invited by Living Waterways to create nature collages of the landscape of Marton West Beck. 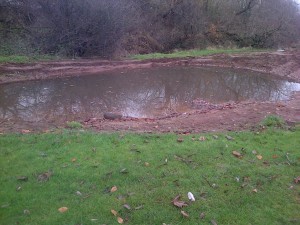 Round 1 of capital works followed with a focus on Marton West Beck. During two weeks of summer 2 ponds and 2 reedbeds were excavated along the beck with a further reed bed being excavated on Newham Beck. Design work for the ponds had previously been drafted by architecture student Emily Pointon from the University of Lincoln. Work was slowed by the presence of a poor sandy substrate and a number of historic land drains which had to be blocked, though this was quickly remedied by the works team. In keeping with Living Waterways mission to improve water quality, the Golf Course co-operated with works by relaying surface drains from the course to be intercepted by the new wetland features as opposed to draining straight into the becks. 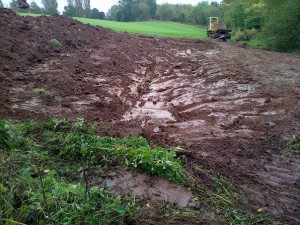 Round 2 of capital works began operation in mid October. Several small jobs were finished on the previous works to maximise their potential as water vole habitat. Newham Beck work followed this with 1 reedbed and 4 large ponds being excavated along the beck. Work was expedited by the presence of a good clay substrate. As a result ponds were able to be excavated larger, with additional ponds being planned on site in collaboration with the course manager. This helped to make up a shortfall in habitat area caused by the poor substrate of Marton West Beck. This led to some creative flare on site with complex pond/reed bed hybrids being created to maximise habitat potential. 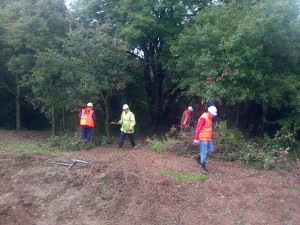 During round 2 works, volunteers from the inclusive volunteer team began scrub clearance along the banks of Marton West Beck under the supervision of Mathew Dove-Jones, Tees Valley Wildlife Trusts conservation assistant. Scrub clearance was performed in order to promote vegetation growth and provide food and cover for water voles. Similar scrub clearance is already carried out on the opposite bank as part of the BoroBecks project, with the work of both projects now complimenting each other, it is hoped that the habitat of the beck banks will be altered enough to promote the recolonisation of the beck by water voles as well as the new wetland features. 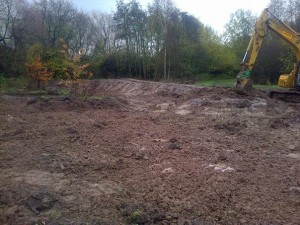 On November 18th 2013 Living Waterways began work at Bluebell Beck. A long reedbed has been excavated parallel to the A19 to intercept road runoff, whilst a further large reedbed has been excavated near the confluence of Saphwood Beck. Bankside scrub has been cleared from the first reedbed whilst the decision was made to include islands in the second reed bed to provide additional burrowing sites for voles and potential nesting sites for birds. A large pond has also been excavated which receives surface runoff from the footpath.

For more information on the project or to get involved please contact: