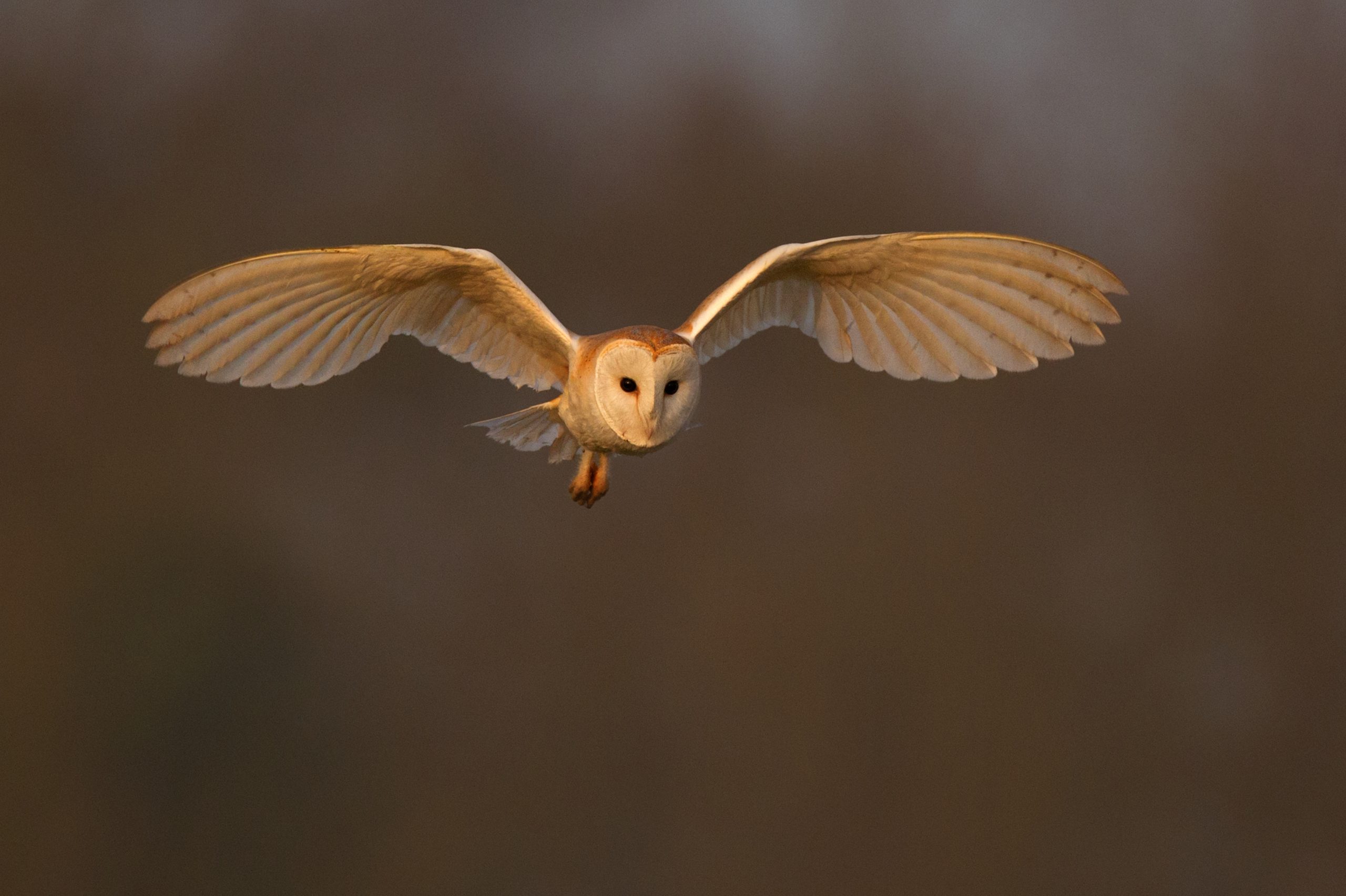 Owls are some of our most captivating birds. Their love of hunting at dawn, dusk and even in the dark gives them a sense of mystery. With a good view, it’s easy to tell an owl from any other bird of prey thanks to their large head with big, forward-facing eyes. But how do you tell one owl from another? Here’s our guide to the five species you’re likely to spot in the UK!

A very pale, slender owl, typically white on the underparts and golden-brown with grey markings on the upperparts. It has a white, heart-shaped facial disk with dark eyes. This, and its pale plumage, separate it from any other resident owl. Usually seen over grassland or farmland.

In flight, often gives the impression of a large white bird. Most often seen at dawn and dusk, though can be seen at night or even hunting during the day. Flies back and forth over fields.

The barn owl calls with eerie squeals and a shrieking ‘shreeee’. Take a listen…

A mostly brown, fairly compact owl with a large, rounded head. A little larger than a barn owl and usually seen in woodland. The plumage is mottled brown but can vary from greyish to reddish brown. The facial disk is mostly plain, with a narrow, darker wedge extending down between the large black eyes.

In flight, shows broad, rounded wings. It has a very direct flight with quick wingbeats and long, straight glides, often only flying short distances from tree to tree. Likes to hunt from perches, swooping down to prey on the ground. Largely nocturnal and rarely seen flying during the day.

The tawny owl has a rich repertoire of calls. Listen out for the short ‘ke-wik’ contact call and the quavering ‘hoo, hu-hooo’ advertising call.

A sandy-brown owl similar in size to a tawny owl, but with longer wings. The upperparts are mostly yellowish-brown with darker streaks, whilst the underparts are a paler yellow with dark streaks on the breast. The facial disk is a pale whitish or yellowish-brown, with a well-defined border. There are dark patches surrounding the piercing yellow eyes, as if the owl were wearing a lot of black eyeshadow! The short-eared owl has short ‘ear-tufts’ on top of the head, though they are usually barely visible.

In flight, shows long, narrow wings. Compared to the similar long-eared owl, the wings are slightly longer and more slender, with solid black wingtips – as if they have been dipped in ink. It has a streaked breast, but a pale, un-marked belly, and thick dark barring on the tail. It also shows a white trailing edge to the upper wing. Flies with slow wingbeats and wavering glides. Often hunts during the day, as well as at night. Breeds mainly on moorland, but found more widely in winter when migrants arrive from the continent.

The short-eared owl is rarely heard away from its breeding grounds, where males sometimes perform display flights, giving a fast series of deep hoots as well as short, quick wing-claps. Other calls are rasping barks, which are given in a quick series when birds are alarmed, like this one…

A streaky brown owl that looks very similar to a short-eared owl. It has generally darker feathers, with less of a yellow hue than short-eared owl. The facial disk is buff with a well-defined blackish border, with white ‘eyebrows’ extending down towards the beak. The eyes are deep orange and only have a little bit of black feathering around the inner edge – it doesn’t surround the eye, as in short-eared owl. There are long, obvious ‘ear-tufts’ on the top of the head, though these can be lowered and less conspicuous.

Long-eared owl is typically a nocturnal hunter but can sometimes be seen hunting during the day, so seeing an ‘eared’ owl hunting in daylight hours doesn’t automatically make it a short-eared owl. In winter, resident birds are joined by migrants from further east. Forms communal roosts, which can be very sensitive to disturbance so should be viewed from a distance.

The male long-eared owl advertises with deep, soft hoots with no inflection, given in a regular series with a hoot every few seconds. Sometimes gives weak wing-claps as it flies over its territory. The female has a more nasal call. The begging call of chicks can be heard from a great distance: high pitched squeaks like the hinges of a rusty gate…

A small, compact owl with a rather flattened crown. The upperparts are dark brown with whitish streaks and spots, which are large on the back but fine on the head. There are larger whitish markings that give the impression of a false face on the back of the head. The underparts are whitish with bold brown streaks. The facial disk is greyish brown with prominent whitish ‘eyebrows’ that give it a stern expression. The eyes are yellow.

Flies with a fast, bounding flight similar to a thrush, though will take a more direct, flapping flight over short distances. Hunts by swooping down from a perch, but will also run across the ground in pursuit of prey. Most active at dawn and dusk, but can often be seen during the day.

The little owl has a variety of calls, including a fast ‘chi-chi-chi’ alarm call, a low-pitched hoot, and this mewling call…

The five owls above are all residents in the UK, but occasionally other species might be spotted. Some, like Tengmalm’s, hawk, and scops owls are extremely rare visitors from Scandinavia or continental Europe. Snowy owls and Eurasian eagle owls are recorded slightly more often, but you’d still need to be incredibly lucky to see one.

Europe’s largest owl, growing to around 70cm tall with a wingspan of over 170cm. It has large, dark ear tufts, whitish eyebrows and orange-red eyes. The eagle owl is commonly kept in captivity and sometimes escapes. There are even occasional records of nesting eagle owls in the UK, though they are believed to involve birds that have escaped from captivity. There is a lot of debate about whether eagle owls will naturally cross the North Sea to reach the UK.

Snowy owl is a rare visitor from the north, though has previously bred in Shetland. This large owl is strikingly white, with yellow eyes. Adult males are almost completely white, whilst females and young birds have dark barring. Most likely to be found in winter, in the Scottish Highlands or islands.