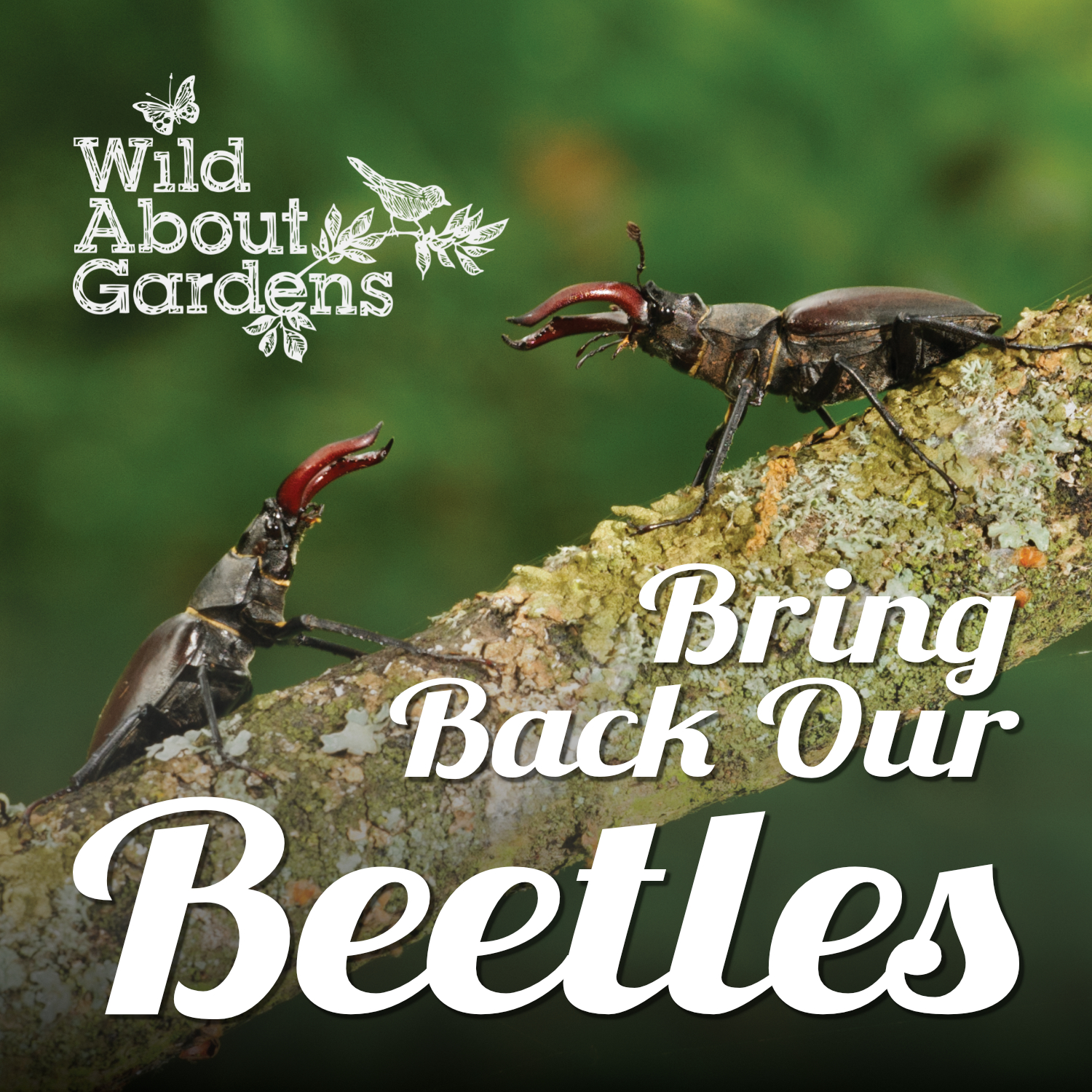 Bring Back Our Beetles is part of the Wild About Gardens campaign. We are calling all gardeners to make better habitat for our wonderful species of beetle. Not all are as imposing as the stag beetle (Lucanus cervus), which is our largest beetle (it is also the largest European beetle) with males measuring up to 8cm when you include their impressive jaws. The size of the stag beetle is dependant on the quality and abundance of food when it is in its larval stage. Amazingly, the larvae can reach even greater proportions, measuring up to 11cm long!

Male stag beetles use their impressive antlers (essentially horn-like extensions to the upper jaw) for defence and aggression when facing off against another male in a competition for mates and territory. They are expert wrestlers and will try to dislodge other males by grappling with their antlers. The larger antlered competitor usually wins the fight. They also use them in courtship with the smaller females (who do not have horned jaws) and will use them in circular displays around the female’s head.

Stag beetle larvae feed on rotting wood from broadleaved species. They are particularly keen on oak, but also beech, willow, ash, elm, sycamore, lime, hornbeam, horse chestnut, apple, cherry and some garden varieties. They gain nutrients from the decaying wood fibre and any fungi and micro-organisms therein. Adult stag beetles, on the other hand, don’t eat – preferring instead the sap from trees and fruit. They can live for 3-7 years, but spend most of this time in their larval state. Adults live for only a few weeks, with the sole purpose of mating.

Where you can find them

Stag beetle populations are declining across the UK and Europe. Our best surviving populations are in the southeast of England, including a good-sized population in London. That’s why the Wildlife Trusts are asking people to make their gardens more beetle-friendly. There are many ways you can do this, but the best is to leave piles of wood to rot in an undisturbed part of the garden. You can also help by leaving areas of your grass uncut or a corner to go wild. It all helps by providing much-needed habitat.

Stag beetles are just one of 650 beetle species that depend on decaying wood! You’ll be surprised how interesting a pile of rotting wood can be. Watch as yours becomes home to all kinds of insects, fungi, amphibians and other plants.

It’s unlikely that you will see stag beetles in Teesside, but if you are reading this from elsewhere in the world and do spot any, you can record your sighting on the Great Stag Hunt website. Information for this article was taken from the Natural History Museum website, which you can visit here.

You can download our ‘Bring back our beetles’ guide here.